Microwave not heating? Here’s how to fix it 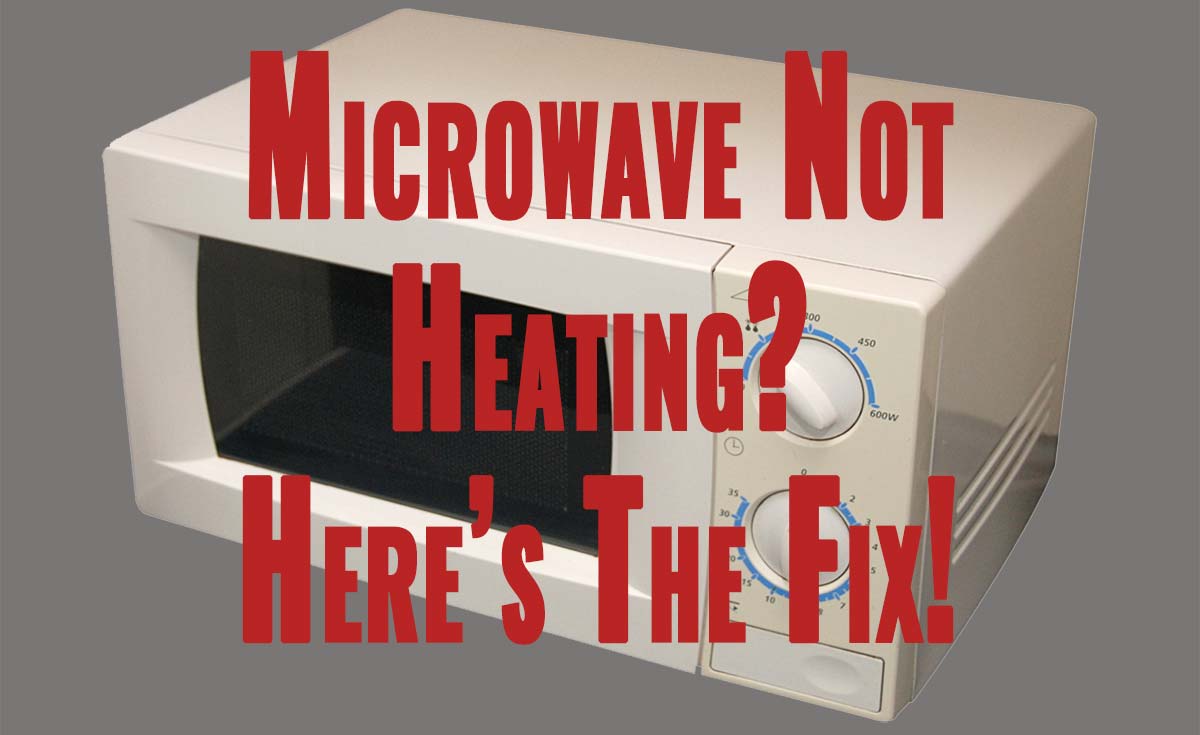 If you have a microwave that’s not heating anymore, this article is for you!

Has this ever been you?

You’ve got those leftovers from dinner last night bouncing around in your head. You decide that sounds like a delicious snack right about now.

So you grab the container out of the fridge and pop it in the microwave (covering it of course!).

You decide 90 seconds ought to do the trick.

You wait, very patiently if you do say so yourself, until that beep goes off.

But as you reach in to carefully grab the hot container, you realize that something isn’t right…the container is still COLD!

You my friend have fallen victim to a microwave that runs, but isn’t heating!

How to fix a microwave that runs but is not heating

So the bad news is, your microwave is broke.

The good news is, it’s a pretty easy fix.

It’s probably just a blown fuse that can be easily replaced.

It only takes a few everyday tools and a few minutes of your time.

DISCLAIMER – Microwaves contain high voltage electrical components. Do not attempt this yourself. Hire a professional.

I know a lot of people might feel like this goes without saying, but I run in to to many folks who don’t realize how dangerous it is to work on electrical components while they are still connected to a live circuit.

Even if the device is “powered off” if still has power running through it. ALWAYS be safe and unplug it first.

I even like to wait a few hours after disconnecting it, just to make sure any capacitors or other components that hold a charge have had enough time to dissipate.

You need to remove all the screws that are holding the outside cover to the frame.

These are usually located on the backside around the edges, and sometimes on the sides at the bottom.

Your specific microwave might vary so look around and keep removing screws that you find until the cover comes loose.

Turn to the side

You want the side closest to the control panel to be facing you.

That is where the electronics are located and where you will be working.

Most of the time this will be the right side of the microwave, but I have seen the opposite.

Whichever side that is for you, turn it so that side is facing out toward you.

Wearing insulated gloves would be highly advisable just to be safe

Looking down at the inside of the microwave, you should see a small long plastic container. It will have a wire coming out each end.

This plastic case contains the fuse.

It might be clipped down to another component, or it might just be held in place by the wires connected on the ends.

Either way, you should be able to unclip it if it is clipped and then slide it out of the frame.

It is still connected at this point, but there should be enough wire to move it closer to you to work on.

The fuse holder is held closed by some snap clips. These are usually on the front.

If you can, with just your hands, pop these open. If you need something to pry with, use something plastic or wood. Don’t use anything metal as metal is conductive.

Once open you should see the two wires coming in from each end, and the fuse in the middle that connects them.

The fuse and wires should lift out of the plastic container now which can be set aside.

You have reached the source of the problem! The most likely reason your microwave is not heating is because this fuse is bad.

This type of fuse is a barrel fuse or glass tube fuse.

To remove the fuse (and still wearing insulated gloves) gently tug on the two connectors.

One of the ends will slide off the fuse, leaving the other side still connected.

Simply grab the fuse and again gently pull until it slides out of the other connector.

You now literally have the problem in the palm of your hand!

Is my fuse bad?

You can tell if the fuse is bad by looking at the the wire inside the glass part. Usually a bad fuse will no longer connect end to end, but will be broken or burned .

A good fuse will have a continuous wire end to end with no breaks or gaps. There are a few different styles. Some have a straight wire down the middle, some have a coil. The thing to check is if it continuous.

If you happen to have a multi-meter, you can use it to check continuity between the metal caps. If you don’t get continuity, the fuse is bad.

Replace the fuse with a new one

At this point all that’s left to do is to install a replacement fuse and follow the steps in reverse order to put everything back together.

You should again have a working microwave that cost a fraction to repair than it would have cost to replace.

I didn’t know what fuse I needed until I opened my microwave and looked at the fuse, and you probably won’t either.

This ended up being a 2 stage repair as I had to open it see what the fuse was and order a replacement.

I set everything aside for a few days until it arrived, at which time I followed the steps in reverse to install it and re-assemble everything.

What fuse do I need for my microwave?

There are 2 possible ways to know which fuse you need.

Once you discover the specific fuse you need, a simple google search should provide options to purchase a replacement.

With a few household tools and an inexpensive replacement fuse, you too can fix your microwave if it’s not heating.

This usually only applies if the microwave still powers on, but doesn’t heat.

If your microwave won’t power on at all, you probably have a different issue. We’re passionate about living life to the fullest. We love finding and sharing what we learn to live a more intentional, beautiful, and fulfilling life.

Yes! 🌷 I love this reminder that @kelseywells s

May the Hope of Easter fill your hearts today and

This bouquet from a recent work event has been bri

My bestie. My sister. 💞 My inspiration and my "

Don't give up- ever! You must become a "fighter" t

Treasure each moment while you can, we're not prom

Could he be any more perfect?! Nope! 🥰 Congrats